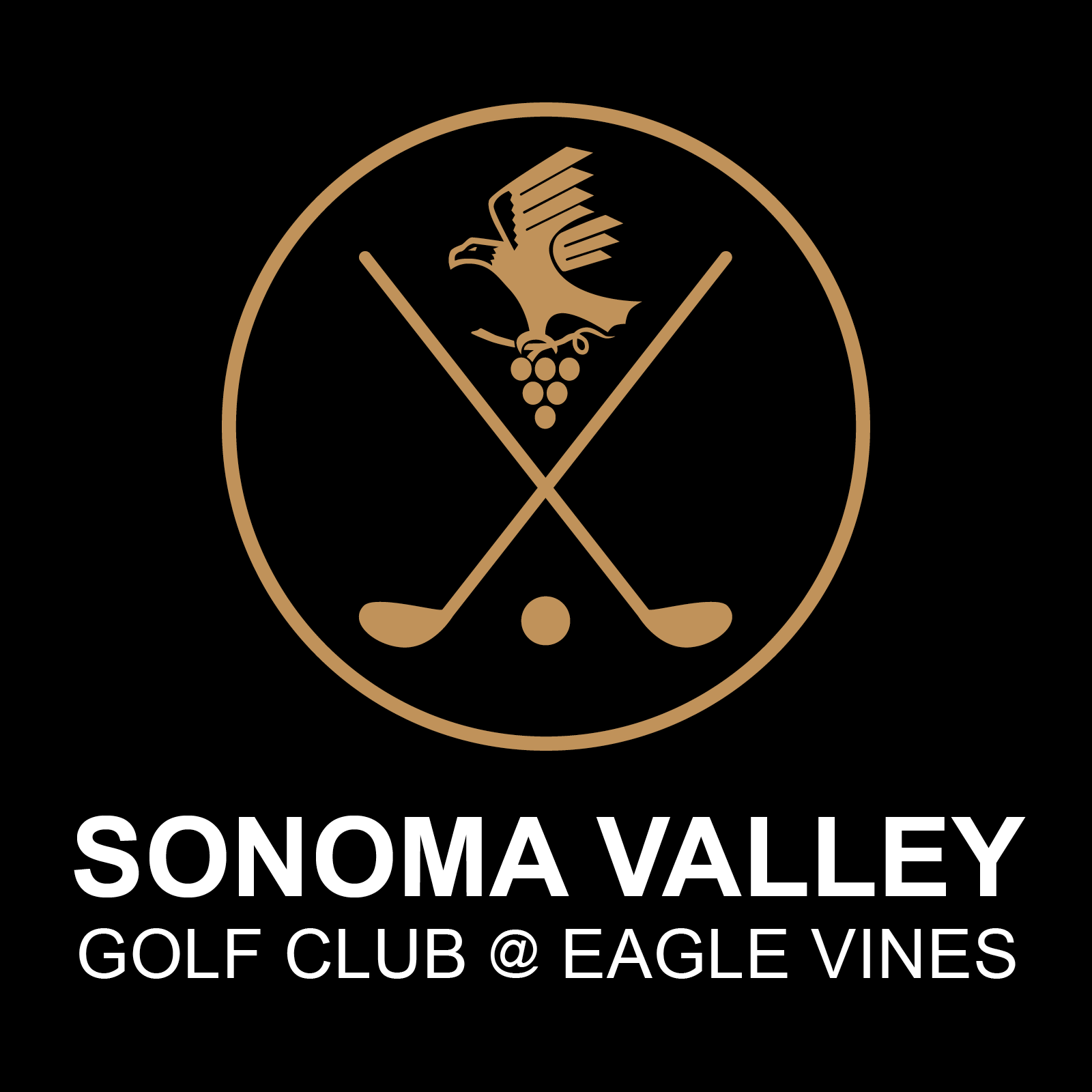 Sonoma Valley Golf Club is affiliated with Eagle Vines Golf Club. Your membership will go through
Eagle Vines.  Nevertheless, SVGC is a separate identity in the Eagle Vines family.

SVGC Membership - Any one of the following:

Eagle Vines Bronze Card (Purchased at the Eagle Vines Pro Shop) - Choose one of the following:

SVGC is currently not collecting membership dues via this website.

If you're ready to JOIN or have QUESTIONS Contact:

Q. How can I get information to join SVGC?

Q. What are different membership categories?

A. Full membership with NCGA dues $60 ($70 if new to NCGA) or Associate for $35 with paid membership in another NCGA club.

Q. Why do I have to buy a Bronze card from Eagle Vines?

A. Gives you substantial discounts and is required by Eagle Vines Golf Course. (See Member Benefits)

2. To sign up double click on the space corresponding to the time you wish and type your name in whatever box you wish and
then click anywhere else on the page away from that box to save your entry.
3. Close the site and it automatically saves your entry.
4. Do not change any other entries without permission from the golfer who signed up in that box.

Q. How do I pay for away tournaments?
A. you have two options
1. PayPal: Pay to email address: SonomaValleyGolf@gmail.com. Use the "Friends and Family" option for no fees.
You MUST have a bank or savings account linked to Paypal. You CANNOT use a credit card to pay on Paypal!
Include info in the NOTE field indicating what the payment is for.
2. Check: Mail payment made out to SVGC to: John Muncy, 756 Oak Lane, Sonoma 95476.

Q. How are points awarded for the Club Championship?
A. Look under News on the website.

Q. How often is my handicap index updated?
A. Daily by NCGA. Go to their site to look it up NCGA.org

Q. What is the difference between Handicap and Handicap Index?
A. Handicap is calculated from the best 8 of your latest 20 scores. A handicap is derived from the index for a given course
and given tee.

Q. If I make an error in posting a score, how can it be corrected?
A. Contact the Handicap Chairman, Jim Honeywell at honeywell.jim@gmail.com. If you are an Associate member you need to contact your home club.

Q. What happens to my sweeps winnings?
A. They are credited to an individual account in your name at Eagle Vines.

Q. How do I spend the money in my sweeps account?
A. It can be used for golf, food, equipment or whatever at Eagle Vines only.

Q. What happens if it rains on a scheduled tournament day?
A. The tournament director will either call off the round or give members other directions]] by e-mail

Q. Can I bring a guest who is not a member to play?
A. Yes, but that person cannot participate in the sweeps.

Q. How often can the same person be invited to play as a guest?
A. Only once and then they must join SVGC either as a regular or associate member.

Q. Is there a penalty for not showing up for a tournament which I have signed-up for?
A. No but it is best to remove your name from Google Docs or contact the tournament director in advance.

Q. What are the rules for tournaments?
A. Look on the website under Events

Q. What is a Net Double Bogey and how is it used?
A. To calculate a Net Double Bogey on a hole use this simple formula: Par+2+number of strokes allowed by your handicap. At EV the handicap strokes are the dots on each hole.
Net Double Bogey is used to adjust your score for POSTING only, not for tournament scoring. It is used when you have blow up hole. It takes the place of ESC. 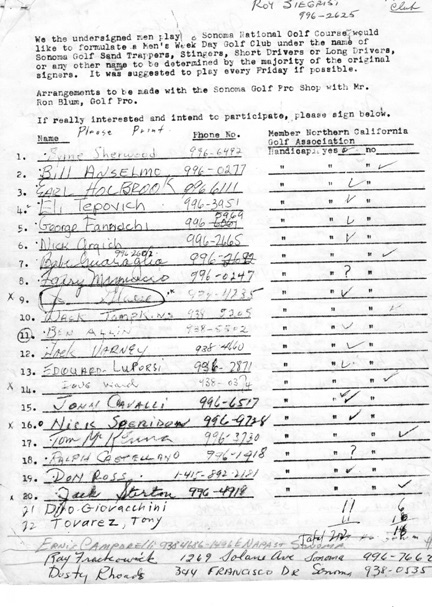 Sonoma National Golf Course from its beginning had men from Sonoma playing the course. At the time it only had a small shack behind the first tee to pay green fees. In 1984 some men got together to form a club which eventually became the Sonoma Valley Golf Club. I will describe the start:(note that a lot of information is lost in the early days.)

“We the undersigned men playing Sonoma National Golf Course would like to formulate a Men’s Week Day Golf Club under the name of Sonoma Golf Sand Trappers, Stingers, Short Drivers or Long Drivers, or any other name to be determined by the majority of the original signers. It was suggested to play every Friday if possible.

Arrangements to be made with the Sonoma Golf Pro Shop with Mr. Ron Blum, Golf Pro. “

The club held semi-annual meetings to discuss NCGA dues, sweeps, tournaments and annual picnic. A managing board was elected every October. In 1998 the Sonoma Valley Golf Club went private and Sonoma Men’s Club was asked to leave. The club settled on Adobe Creek as its new home. At that time handicap cards were still mailed to the club from the NCGA and handed out each month at the Driving Range on Arnold Drive and the sheet with handicaps was posted on the wall.

NCGA started to go electronic in 2002 and we were going to have to charge $5 per month per member if we wanted to continue to send in scores by mail. Only one person understood computers at the time, so therefore a life long membership chair was formed to save the club money.

Sonoma Valley Golf Club started having quarterly board meetings in 2002 and put together committees to keep the club thriving.  Standing committees were Tournament, Special Events, Handicap, Membership, Liaison, Sweeps and Publicity handled by a nine man board.  The Club had 169 players with about 60 – 70 playing every other Tuesday at Adobe Creek.  During the years at Adobe Creek we had a yearly BBQ every Oct. at Nick Grgich’s, a founding members, ranch. Most of the members attended for steak lunch, drinks, raffle and election of next year’s board.

The year 2010 saw the closing of Adobe Creek Golf Course and the club selected Eagle Vines Golf Course in Napa to continue our play. Every other Tuesday was still the day of sign up and sweeps play. An average of 60 players continued to be regulars for this format.  An away tournament chair was added to the club who had the job of obtaining different clubs in Nor Cal for away tournaments for SVGC. This was a great addition to the club. There are so many golf courses within two hours of Sonoma that this gave us the chance to play different country clubs. Between 60 and 80 of our players sign up for six or more away tournaments per year.

We now hold our annual meeting and tournament with a lunch at the EV dining room. This event is held in October and is a memorial to one of our oldest members that managed our club for the many years we were at Adobe Creek. It also serves as a time for election of officers to the club for the next year. We currently have a roster of 151 members including both men and women. We have also developed a website which allow prospective members to get joining information and allows the club to communicate with its members.